How might we create a desirable future with cell-based meat?

Despite the devastating ecological, ethical, and health related consequences of modern factory farming, global demand for meat keeps rising.
Cell-based meat (CBM) is a promising technology that might help save our planet by producing meat in an ecological and ethical manner. The idea is to cultivate meat from harvested living animal cells in a lab—without having to slaughter animals.

Disruptive technologies like cell-based meat have the potential to make our world a better place. They are, however, at risk of getting rejected by the public or triggering unwanted societal side effects.

With this project we wanted to find out how we can prevent these negative developments and help cell-based meat reach its full positive potential as a technology that leads us into a better future.

First we wanted to get a better picture of what might lie ahead of us. Through desk research we identified different influence factors that will impact the future of CBM.

Together with different experts we developed a thorough understanding of how these factors could play out and how they influence each other. We talked to scientists in the field of technology assessment, food technology, consumer psychology and food marketing.
In one case we conducted an afternoon workshop with three experts where we prepared short descriptions of negative and positive future developments and let the experts assess and explain the likelihood of those events.
Other interviews were conducted via video calls. 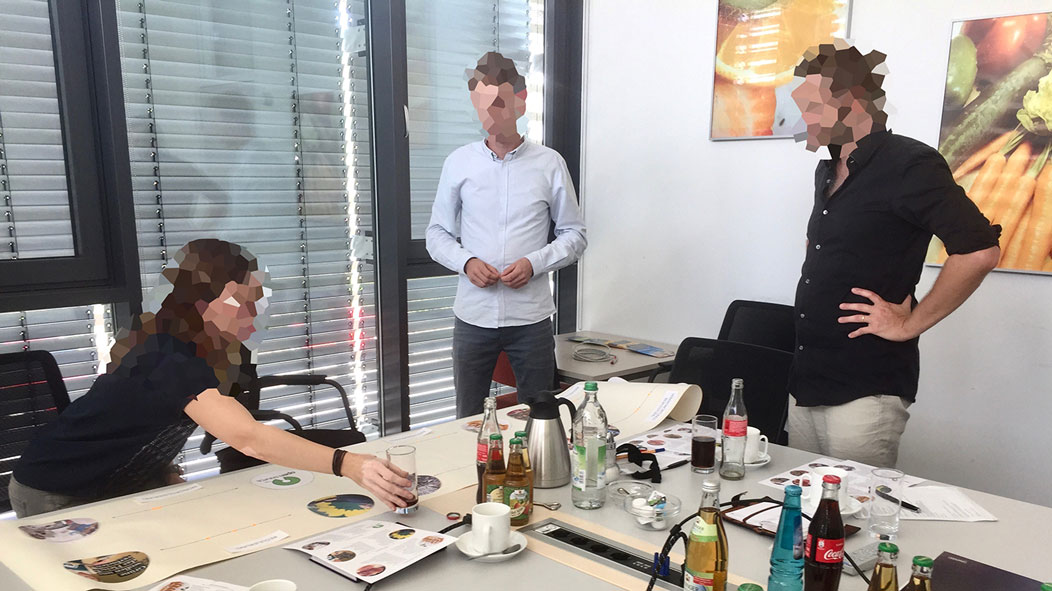 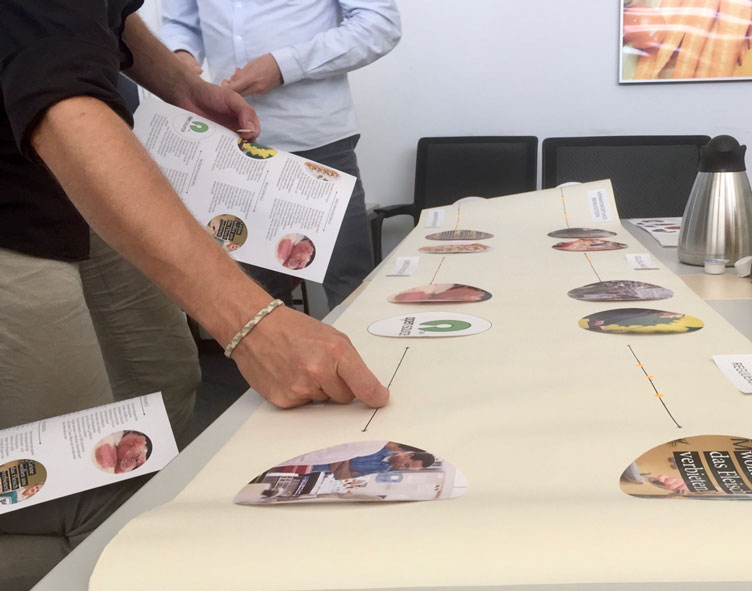 To capture everything that we had learned, we wrote positive, negative and trend projections for the twelve most important influence factors on CBM. At this point we had a pretty good understanding of what could happen with this technology.

We then brainstormed ideas on how to prevent negative projections and enforce positive ones. Within our post-it notes we recognized recurring topics. We were able to boil them down to three main clusters that mark important aspects in handling the CBM technology. 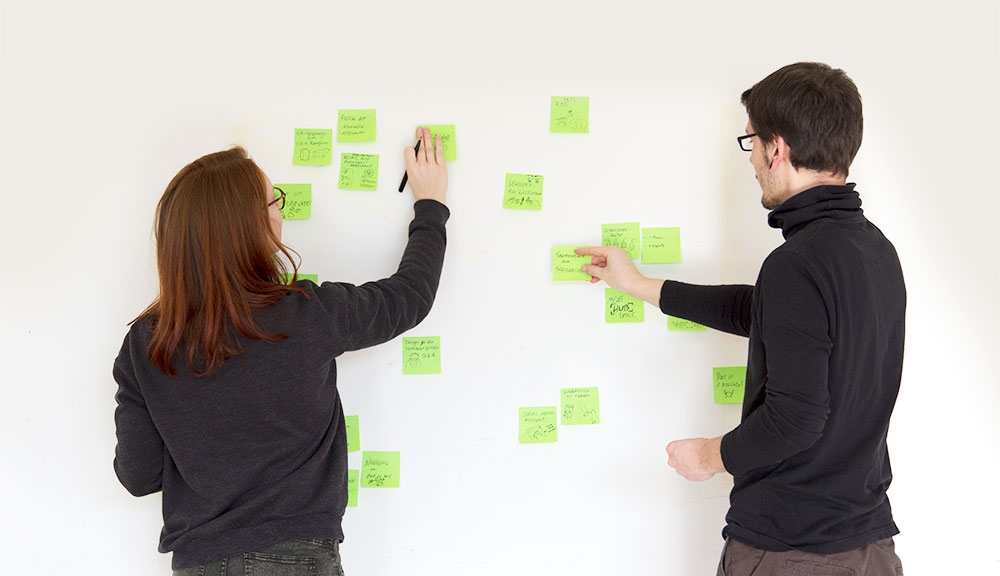 We formed the hypothesis, that the beneficial implementation of new, disruptive technologies such as cell-based meat is tied to three separate principles:


New Technologies must be openly communicated with all accompanying risks and benefits. This helps ease the fears of an unknown future and provides the base for a healthy debate on the subject.


New Technologies must be carefully adapted to the cultural and social context. Radical changes might be met with rejection. Instead, new concepts must be set up in accordance with people's needs and expectations.


Efforts must be made to involve the public in shaping their own future by facilitating free formation of opinion as well as debate. On top of that, new opportunities for participation should be explored that exceed a mere purchase decision.

In first interviews with possible future consumers of CBM we suggested different ways of implementing the CBM technology with our three principles in mind. We visualized these propositions through photomontages and showed them on a computer screen. Participants were then asked to openly comment on those images. 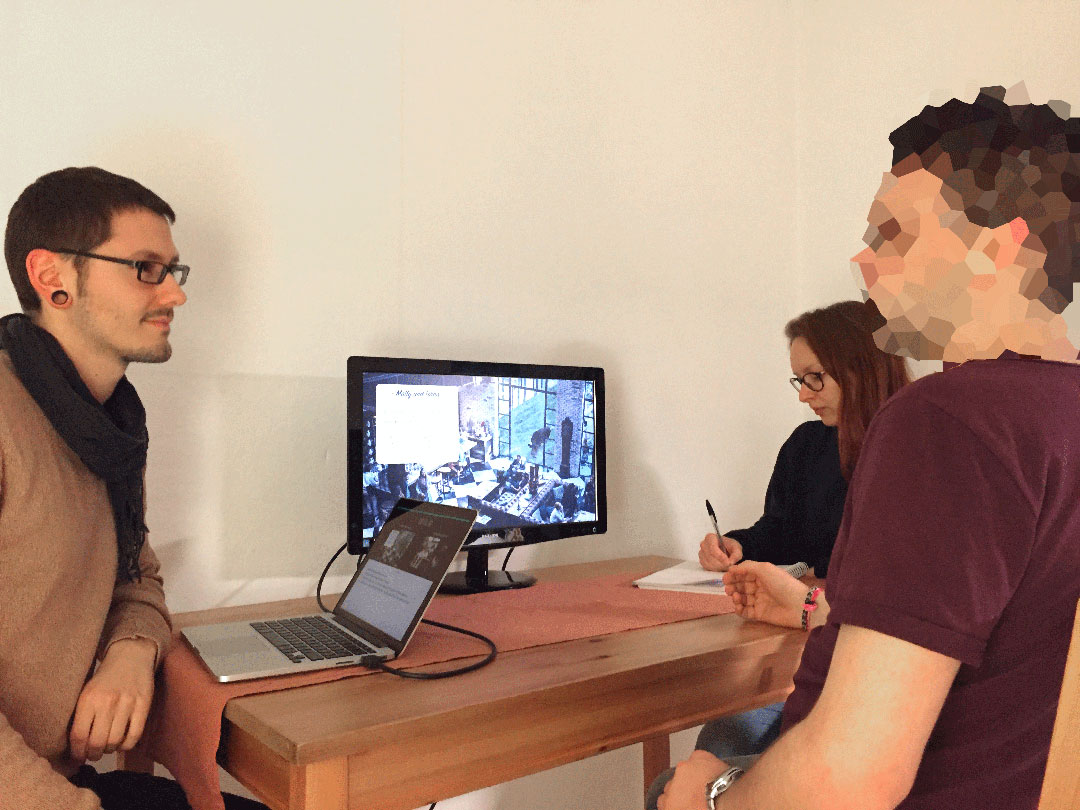 We soon found out that our hypothesis had to be adjusted: Often times, applying the principles as absolutes, did not meet the desires of our participants.
For example, transparency was very important to participants, yet there were certain instances where they felt put off by too much transparency, namely receiving insight into CBM production and the harvest of cells from donor animals.
Similar findings occurred with both of the other principles: 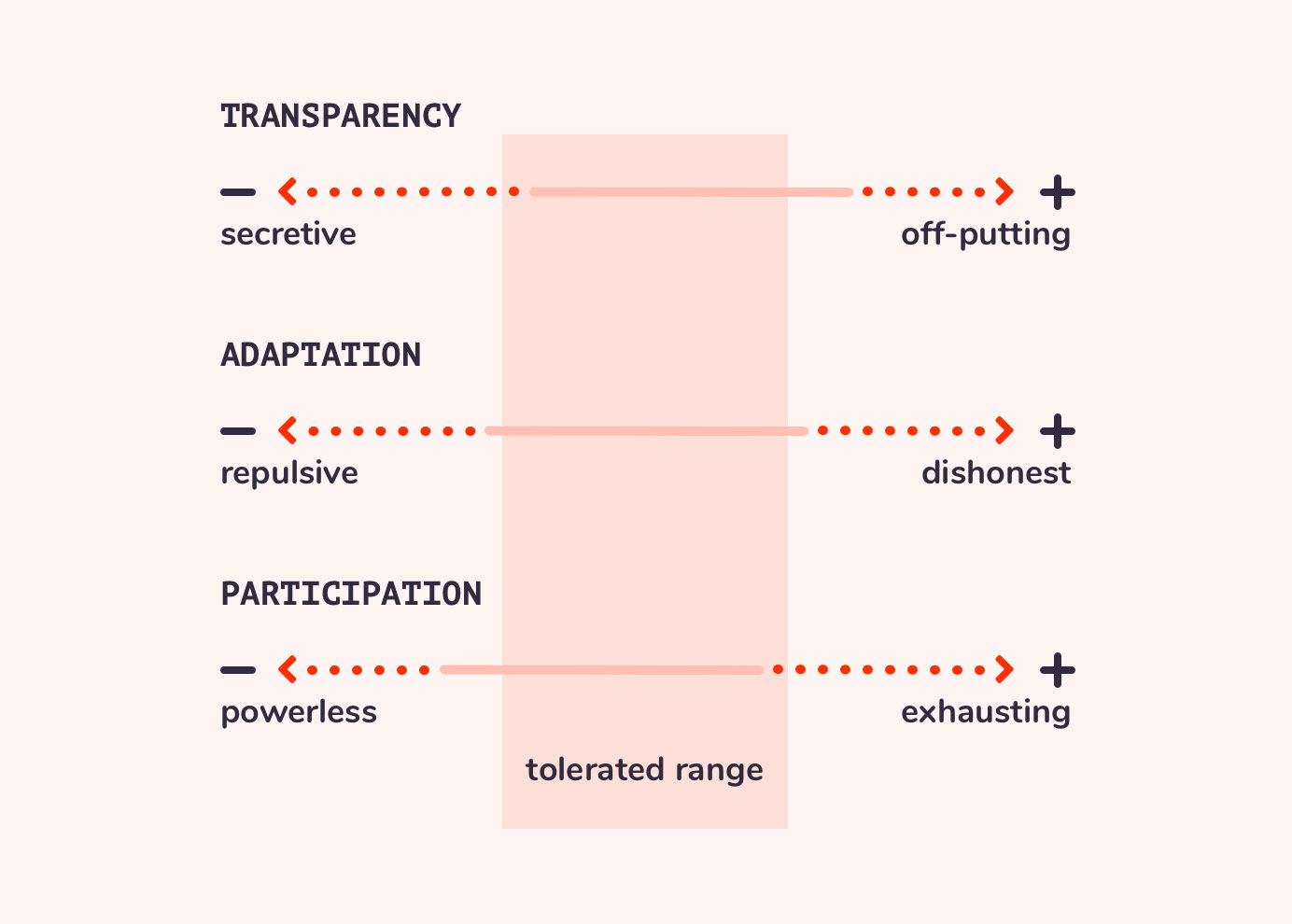 » I would prefer to see an abstract visualization [of the production process] and then decide for myself whether I want to see more.«

» I feel like I’m being fooled. [...] The product is depicted as if it was slaughtered meat. That is just a show, it’s not trustworthy.«

» I like to read what others have to say rather than joining the conversation myself.«

We concluded, that our three principles must rather be understood as scales, where either extreme will result in undesired outcomes. So it is a matter of determining a tolerated range, that will both be accepted by the public and lead to an objectively positive future with the technology.

A method for human-centered innovation 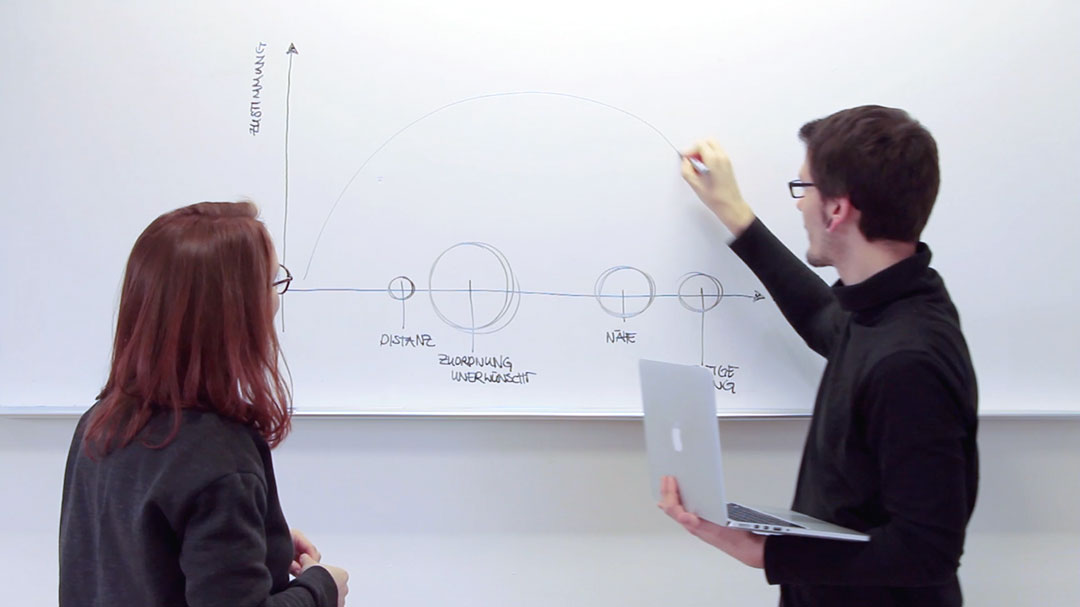 We developed a method that allows designers and innovators to explore and define desirable ways of implementing new technologies.
In this method we use speculative future visualizations and an iterative research framework based on the tensions fields of transparency, adaptation and participation that we defined through our research.

Working with this topic, we became especially interested in what role animals should play in cellular agriculture. Eventually we centered our research around finding out about the ‘farm animal of the future’.

We overall interviewed 19 participants between the ages of 21 and 31, gradually modifying our technique. 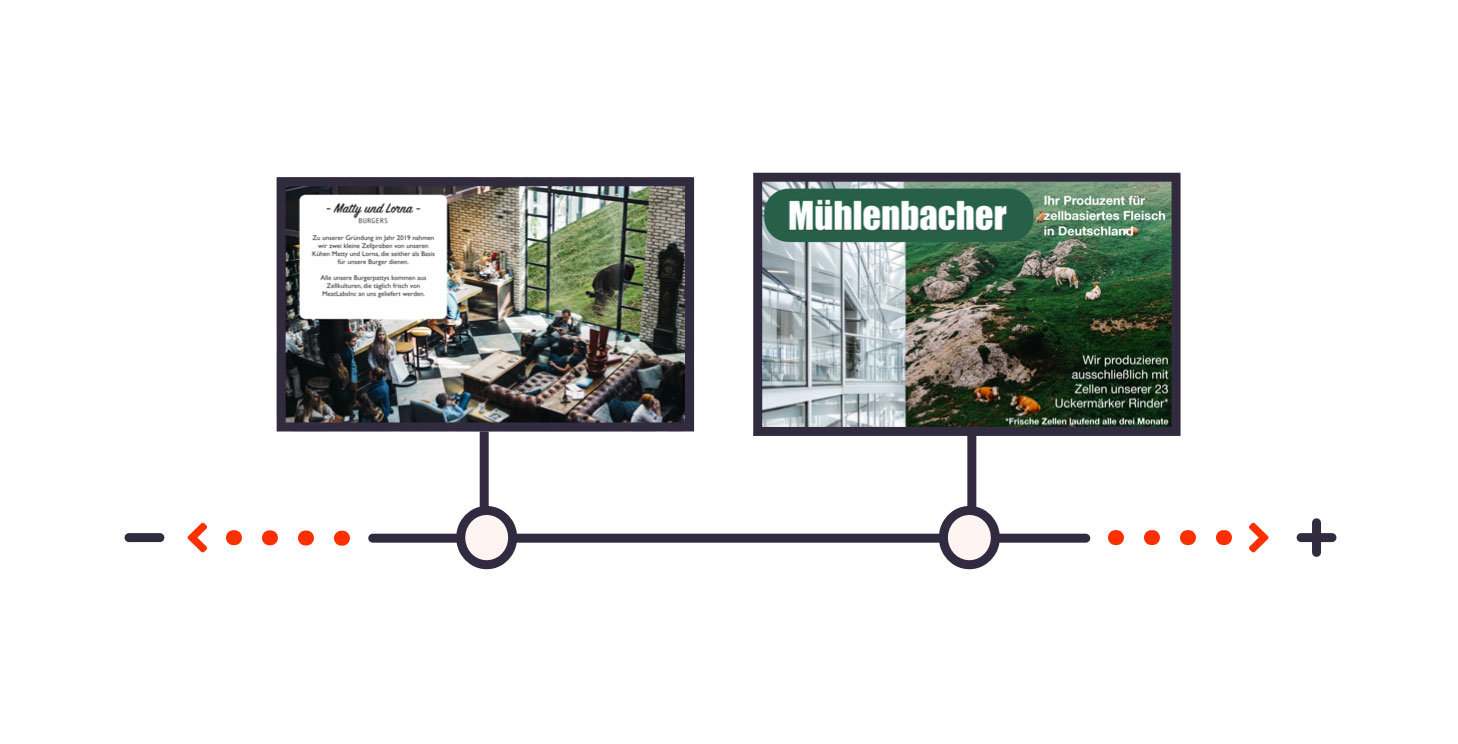 People are confronted with the scarios. 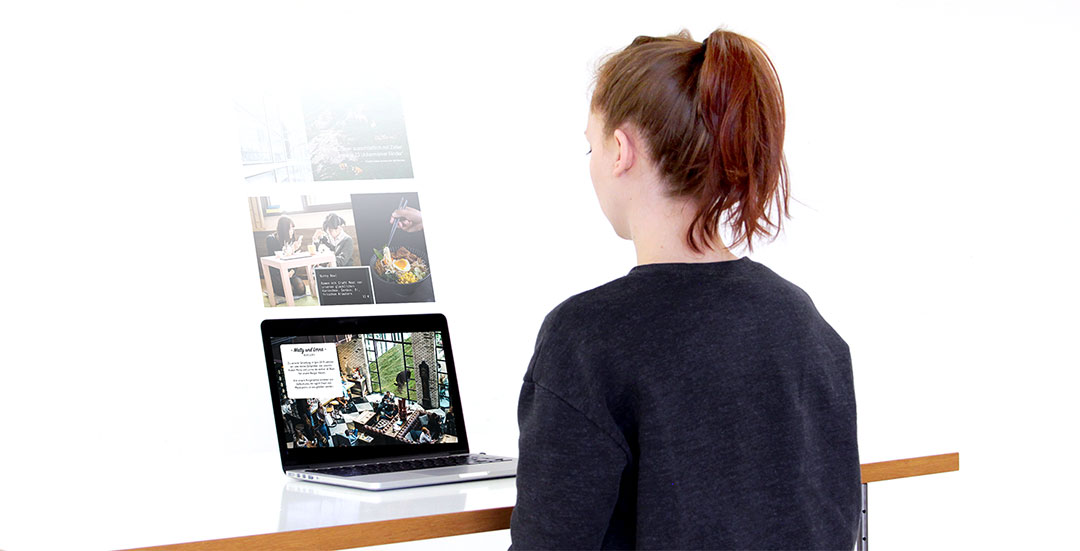 See some of our test scenarios and findings 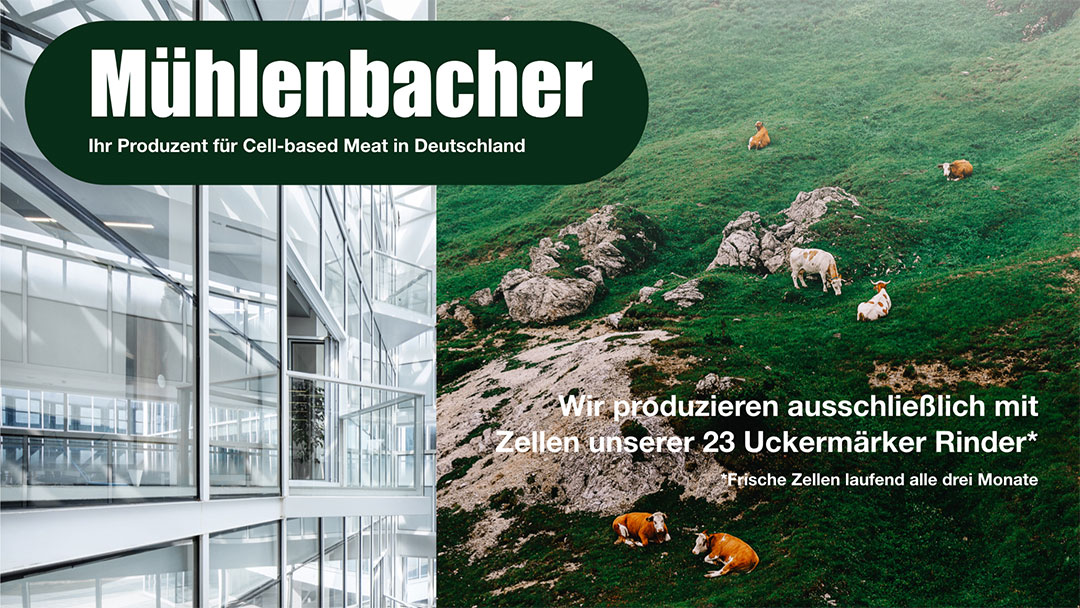 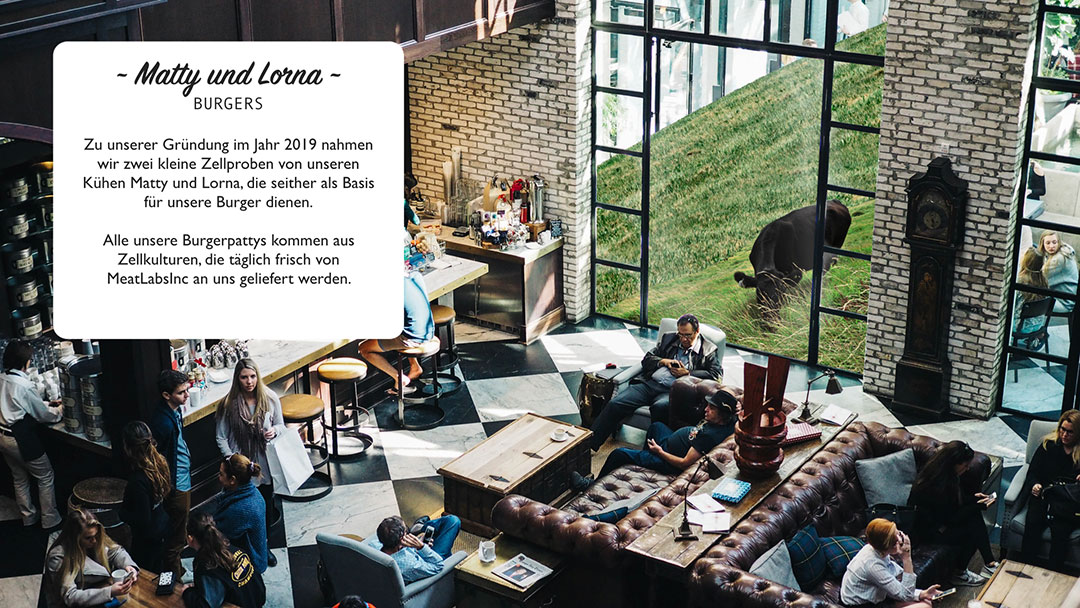 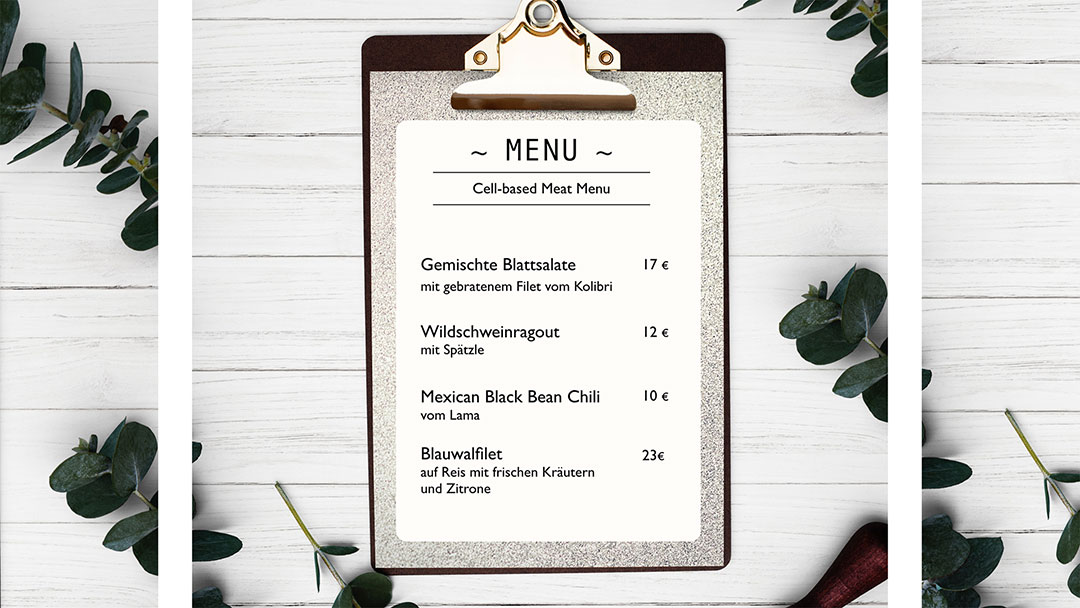 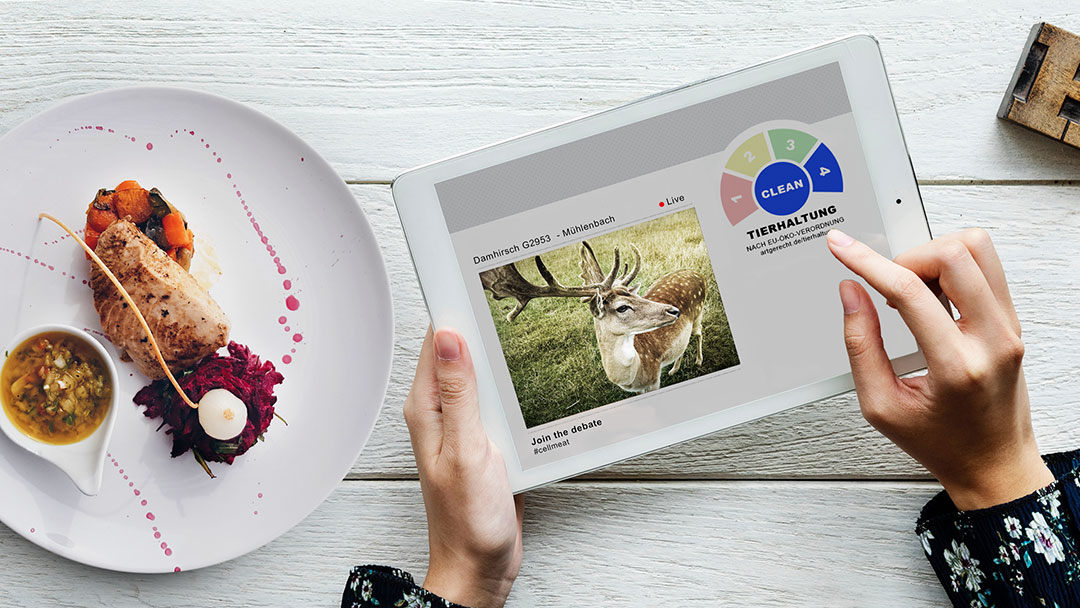 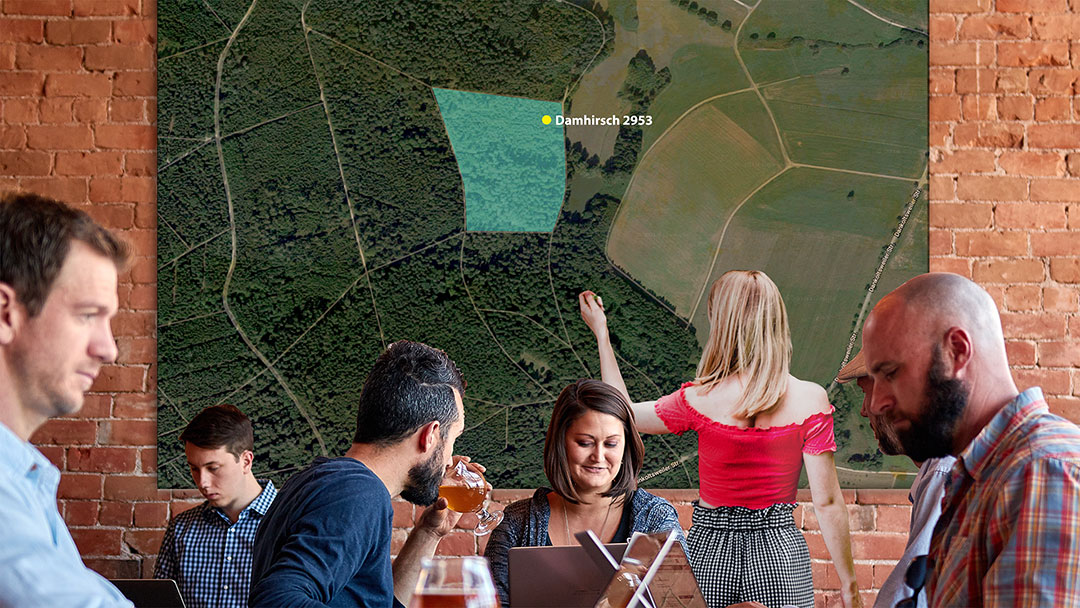 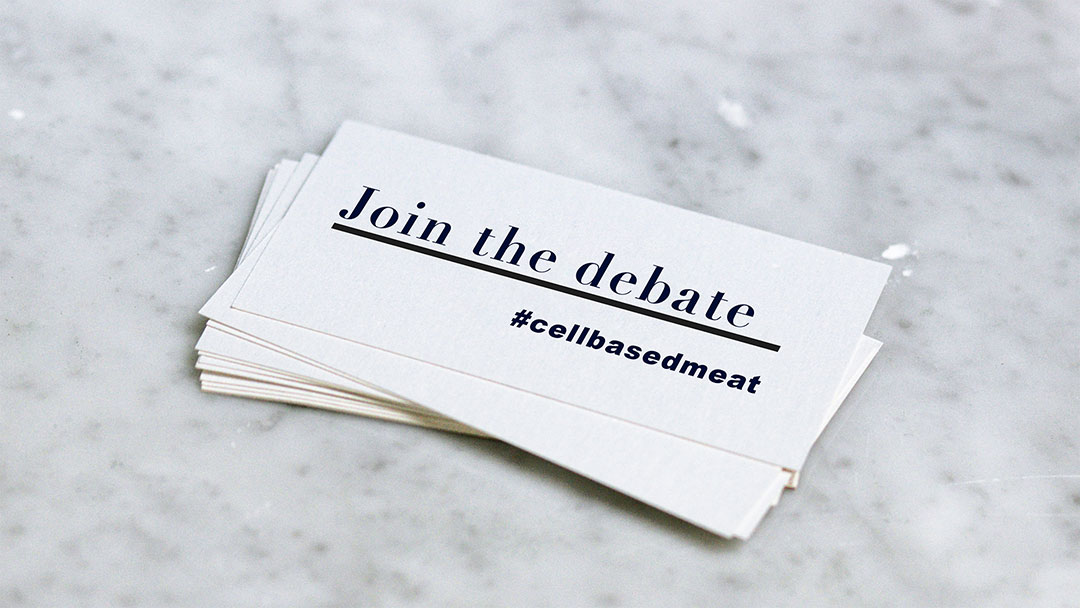 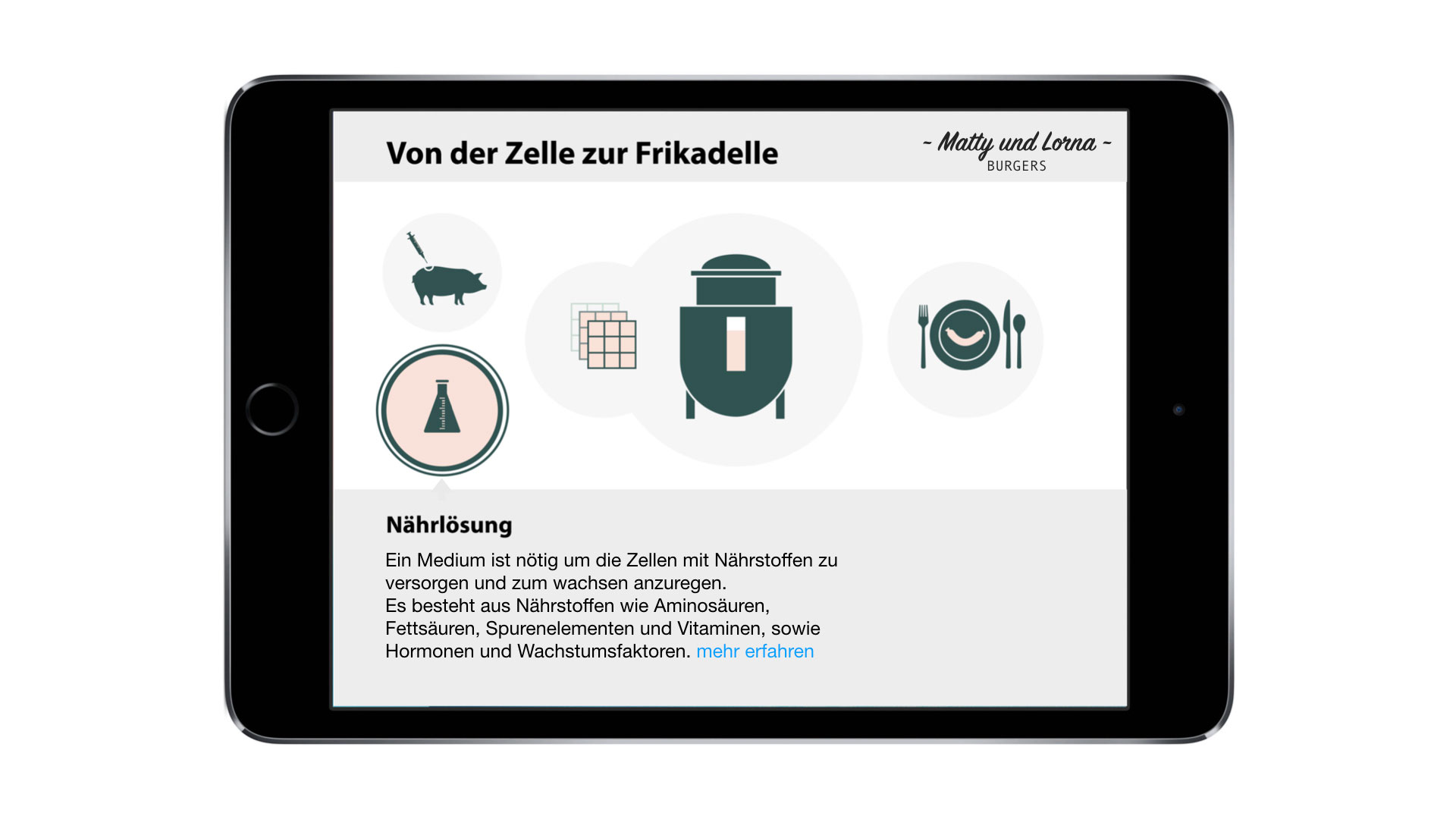 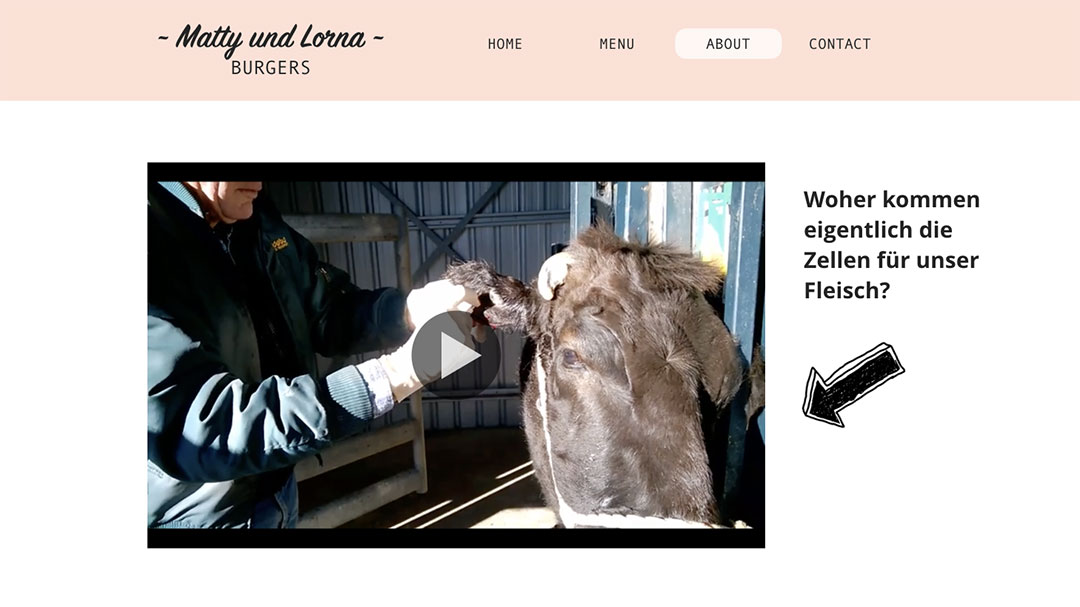 PROXIMITY TO THE DONOR ANIMAL

The fact that animals in cellular agriculture are alive and well, opens the possibility for consumers to know exactly which animal their meat comes from. They could find out more about the animal or even interact with them.

Showing the presence of animals in cellular agriculture helps to remedy a lot of negative perceptions towards CBM. It becomes more tangible and less mysterious.
Many people wish to make sure that donor animals are happy and healthy before eating a cell-based product. Although immediate contact seems like a strange concept to some people, we believe that interaction with donor animals could serve as kind of a USP for cellular agriculture. It brings transparency to animal welfare promises, that continue to gain in importance for consumers.

» You can see here that the animal is still alive. […] And that's what counts.«

» I have heard people compare it to ‘zombie-meat’. But I think in this constellation, seeing the living animal, it is alright.«

» Somehow I can’t shake the thought that this animal still has to die.«

How and what information is provided about cellular agriculture will make or break a consumers view on CBM.
At the same time, new information possibilities arise with CBM, like a corral live stream or interactive media like tracking donor animals.

Participants want the ability to access a lot of information about CBM. More in the context of first-time education about the subject and less for everyday use in regards to a purchasing decision.

Participants are suspicious about greenwashing, specifically about any animal welfare claims, which makes validity and verifiability of information crucially important.

Independent media platforms are an important addition to information provided by producers. Participants wish to read other people’s opinions online to develop their own standpoint on CBM, but rather engage in discussions with friends and family instead of joining an online discussion themselves.

A switch to cellular agriculture would open a whole box of new possibilities in meat production ranging from animal blends to abnormal shapes and colors to immortal cell libraries.

While some participants are excited about experimenting with these kinds of ideas just for the fun of it, most are convinced that such deviations from the status quo should serve a specific purpose. Meaning an ecological benefit or an increase in animal welfare or efficiency.

Participants would accept the use of much fewer animals or even immortalized cells in meat production if that meant fewer stressful biopsies for animals. Even to a point where the animal that originally donated the cells is no longer alive. However, they also want to be assured that biodiversity will be preserved.

» With only a small amount of donor animals it becomes feasible to treat them well.«

» If [using different cells or plant scaffolds] has a specific benefit, I can understand it. If else, I don’t know why you would go out of your way to do that.«

Would we eat CBM from animals we are not eating today?

» You can view the meat as some kind of plant, really.«

» With cell-based meat you can’t really argue that there’s a difference between a rabbit, a cat or a cow...It would still be weird to eat a cat.«

CBM is not necessarily perceived in animal-derived categories like beef or pork. Many participants describe it as a rather abstract or even plant-like food, despite of being aware of its ultimate animal origin. This is seen as negative or positive depending on the participant.

Many argue that the types of ‘edible meat’ are ultimately culturally determined and learned. If enough time passes, some can imagine deviating from familiar cell origins.

CBM could blur the lines between pets and farm animals. The controversy of CBM sparks a thinking processes about the reasoning behind our diets. Some participants start questioning meat consumption altogether.


Making progress in navigating through sensitive or emotional topics in an interview.


The realization that—to draw meaningful conclusions from an interview—you have to look beyond a single statement and analyze all of a participant's answers in context with each other.


The thrill of producing primary research insights that nobody else has explored before.